Fun Birthday Contests for Adults: From childhood, birthday is considered a unique, personal holiday, and since then, it has been customary to celebrate it with fun and on a grand scale. The fact that the young years have passed cannot be considered sufficient to spend this day with restraint and in an adult way.

On the contrary, you need to have fun today, as they say, to the fullest. One way to do this is to organize in advance not just a plentiful feast but also a real holiday with fun and entertainment. One of the essential parts of such a party is contests. Today, you can find not just a lot, but a lot of contests aimed at any audience and number of participants.

A birthday, which falls in the summer months, is always a reason for the secret envy of others, and this is not at all surprising, because they are given an excellent opportunity to celebrate this business in the fresh air, arrange a trip to nature and have fun from the heart in the open air.

In this case, with competitions, it is even easier: in addition to those that can be held indoors, there is a whole group of competitions that can only be held outdoors.

These include the options listed below.

This is a unique competition: even though it can be held on a green lawn, winter and soft snow are the best time and place. It will take a little:

The requirements for winning are similar to football ones: to score as many goals as possible into the opponent’s goal; however, unlike the traditional game, players are tied in pairs – either with their feet or by the body. Of course, one cannot do without numerous falls and bursts of laughter. 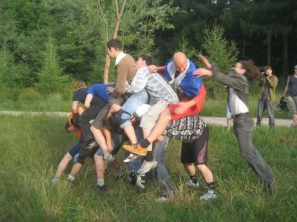 The first team’s goal is to reach the finish line and stay on their feet; the second goal is to climb the elephant for the whole team. The team that can complete their mission wins, after which they switch places.

This simple but fun competition requires only two toilet paper (preferably, their total length is about one hundred meters). Two participants are taken from each team, the first of whom run across the lawn and unwinds the roll, after which the second must unwind it. The team that will cope with its task faster wins. If in the further program of the evening there is a competition “Mummy”, paper can be used in it.

For this competition, just a large room is suitable, but it is much more fun to conduct it naturally. The only thing required for the competition is two pairs of stretchers. All participants are divided into two teams, each of which, in turn, is divided into three: two of its members are orderlies, the third is a wounded one.

The task is to run the entire distance with the wounded on a stretcher as quickly as possible. Those wishing to complicate this competition can prepare in advance bandages for the wounded and bandages with a red cross for the orderlies, which they will change when passing the baton.

Earlier it was a game called “Twelve Notes”, and people of the older generation remember how they enthusiastically played it in childhood. Today it has transformed into a fun and interesting competition that can be saved for children’s name days, but adults participate in it with no less pleasure and enthusiasm. You need to write twelve notes, each of which indicates the next location, and hide them in the appropriate places. The first team to find all twelve pieces will be the winner.

The ideal place for this game is a sandy beach, where you must not forget to take with you two large basins that will play the role of ships. Participants are divided into two teams and in pairs overcome the “ocean” – a sandy beach, one in an impromptu “boat” sits, and the second pushes it along the sandy waves. Of course, the winner is the team whose members pass the test first. 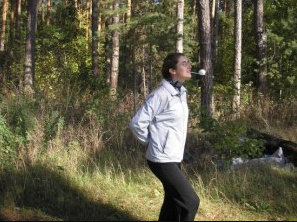 It is not recommended to hold such a competition indoors; you will find out why later. It requires the following set of items:

The host plays the role of a cook, to whom the members of both teams bring eggs on all fours. Perhaps it would be much easier if they carried eggs in their hands, but they do it in a spoon clamped in the player’s teeth. It is clear that not all eggs will remain intact, and which team could deliver more of them, the host will announce.

For this game, a square with sides of 4 meters is drawn on the ground. More is possible if there are many players. In this square, like in a lake, the participating fish frolic; you cannot leave the reservoir’s boundaries. The “fishermen” come into play:

After that, she also becomes a “fisherman”, standing in a chain and holding hands. The “seine” is lengthened until all the fish are overfished. The last, most agile “fish” wins the competition.

The list of competitions held on a birthday in the open air can be continued almost indefinitely. While preparing a program for a birthday person, you can find something that will suit everyone.

It doesn’t matter if the birthday has to be celebrated not in nature because there are many entertainments for the premises that can make the day unforgettable for everyone, including the birthday person.

Open It, Pour It, and So on

It should be held at the beginning of the evening when its participants have not yet had time to eat and are firmly on their feet. For this competition, for each team, and there are usually two of them, you need:

All this is placed on the table; the teams are at a distance of 3-5 meters from it. The process is as follows: the first participant runs up to the table, opens a bottle, returns, passes the baton, the second runs, pours soda into a glass, the third participant must drink it, the fourth participant has to eat a sandwich, and so on in a circle until the table is empty.

The selected participant is seated on a chair with his back to the team, a piece of paper is attached to his back, on which the name of some necessary daily place is written. It can be a store, a toilet, an institute, after which all the other participants must ask him different questions: why does he go there, what do the others do, and he, not knowing the subject, gives answers that can cause a lot of laughter. 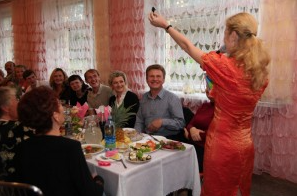 This funny game can be played without leaving the table, which is usually done. The presenter asks everyone sitting in turn what part of the body he likes and dislikes from the neighbor on the left. For example, the answer is this: I do not like the ear of the neighbor on the left, but I love the knee. After the survey is over, at the presenter’s suggestion, the “favorite” part of the body is kissed, and the “unloved” part is bitten. Five minutes of deafening and stormy laughter is provided.

For this entertainment, you need to prepare a bag with unusual things in advance, which can be a motorcycle helmet, fins, a hat, a cap, a nipple, and other items. The bag is given to the presenter, the music is turned on, and the participants pass an object to each other, for example, a pencil. The presenter suddenly turns off the music, and whoever has a pencil at that moment gets another item from the bag, and so on, until it is empty. After that, everyone puts on what they got in the distribution process.

Who Knows the Birthday Better?

This competition is for the knowledge of the birthday man, the peculiarities of his life and character. A list of questions is prepared in advance; they are written on cards handed out to guests. The peculiarity of the questions is that the answer to each is a number. 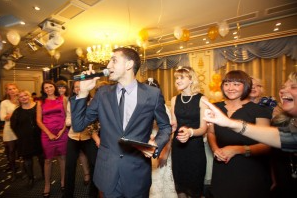 A general card with numbers is also being prepared, each field on which in size and shape coincides with the question cards. The task is to decompose your questions into numbers with the correct answers as quickly and correctly as possible. Questions might be:

Guests will not only have fun but also learn a lot.

To hold this competition, you need:

Two people participate in the competition; their task is to quickly “blow” their ball-car to the finish line. It requires a fair amount of lung strength and accuracy so that the ball does not go off the track or roll into an inaccessible place.

As an Amazon Associate I earn from qualifying purchases.